The last two days of this summer journey, one man, one dog (Murphy) and a whole bunch of stuff in and on our car (including two surfboards that haven’t been used in nine years), were the easiest. In Holbrook, Arizona – or somewhere near there – I spoke with a few locals who invited Murphy and me to a Pow Wow. We had to respectfully decline this time, but they pointed the way for grub and the quickest way to San Tan Valley (south and east of Phoenix near the Superstition Mountains). It’s the Hashknife Pony Express route, honoring the Pony Express that delivered mail starting the 1800s in the West, and more specifically in this case, to honor and remember the Navajo County Hashknife Sheriff’s Posse, which began to help protect landowners but eventually became a search and rescue operation in the 1950s. You can read a nice history of those days in Paula Ellsworth’s piece originally published in 1967 and reprinted in the Arizona Journal in 2015.

According to the Hashknife Pony Express website, the January Pony Express event is the longest-running sanctioned such route. “(The) horseback mail route covers over 200 miles from the majestic Mogollon Rim through the wilderness of the Mazatzal range to the desert city of Scottsdale” where the Passing the Legacy artwork honors the riders. Murph and I didn’t follow it all the way, of course, but we took it through the beautiful mountains and wondered how hard the horses – and the riders – must have to bust it along this majestic stretch.

The day actually started at another spot – one of those “I’ve lived here all my life and not stopped to see it” places (actually what a nice lady at the Albuquerque Microtel Inn told me).  We decided to drive a few miles up the road to the Petroglyph National Monument. The National Park Service calls the site, including volcanic cinder cones and easily accessible hikes, “one of the largest petroglyph sites in North America, featuring designs and symbols carved onto volcanic rocks by Native Americans and Spanish settlers 400 to 700 years ago. These images are a valuable record of cultural expression and hold profound spiritual significance for contemporary Native Americans and for the descendants of the early Spanish settlers.”

I recommend you go in the morning – especially you are otherwise stupid enough to take your dog mid-day in June – or at dusk before the parking lots close. The heat – and no access to water on the trails – could be dangerous. Murphy was worn out good for the ride (see did have plenty of water) and I saw some pretty amazing petroglyphs and met some nice people. 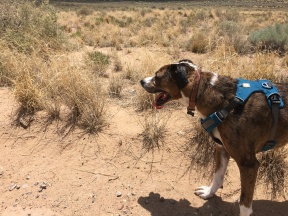 Yes to dogs beware of rattlesnakes! 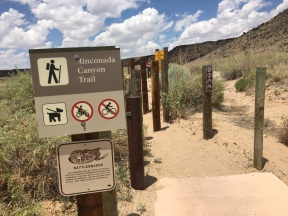 Sand is hot – be careful for your dogs.

close to the trail

the canvas for petroglyphs

Get me back to the car – and the AC 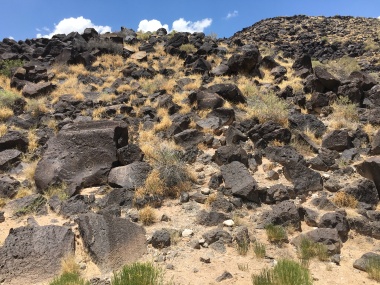 We stopped off to see our friends Buddy, Biggy Smallz and Aunty Suzy – the Pressman Pack – who are learning about life in the 110 degree Arizona summers. Thank god for AC, swimming pools and swamp coolers. And siestas. Murph and I are already big fans of siestas. We got back on the road after a good night’s sleep, and, dare I say, a siesta. So we wouldn’t be driving all day in that heat.

Driving these days – with little talk coming from my running mate – requires streaming audio. Pandora stations I loved on this journey included my Bob Dylan Radio – songs I can sing to, and of course streaming Radio Margaritaville doesn’t hurt. The MLB app means I could listen to at least two full baseball games on each leg of the journey, too, keeping up with the California teams, the Braves and whatever games were close. But singing along to music – getting some laughs, finding a vibe for the stretch brought me to road music for the last leg. I dialed in Willie Nelson Radio on Pandora, and though I didn’t get one listen to “On the Road Again” (come on Pandora!), it was a good choice. Love and loss, starting over, homes where the heart is… and honoring the legacy of those who’ve preceded us are all some of the themes I heard on the playlist, and it was a blast to sing along.

We rolled in to Carlsbad around midnight, and Billy (heartworms sidelined him on this trip) and his girlfriend Kona greeted us with excitement. Murphy woke up Dusty – with a bark – and the trip ended.

Billy‘s doing great, by the way, maybe putting on a little weight since he can’t exercise quite as hard while he heals, but you try telling him he’s sick. He’s not buying it. Still, please give your dog his/her heartworm meds wherever you live. Every state in America has reported cases.

So now we’re back to the Ten Legs to Sunset, me and Billy and Murph… the adventures continue…